Estimating less than 3 days to finish, although have not heard from our brave hiker in a few days.

So, here’s a nice list of the changes that may or may not be true, that our intrepid hiker will not notice when he returns to the loving bosom of his family:

Spouse has decided to retire early and pursue a career in the horse show circuit: 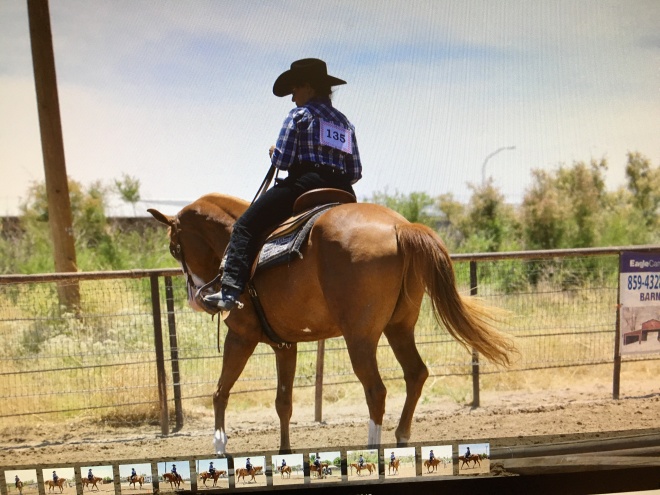 The daughter, fresh from her existential crisis, has quit medical school and taken up drinking:

The son has given up on grad school and is off somewhere staring at the sunset:

The roof is still leaking: 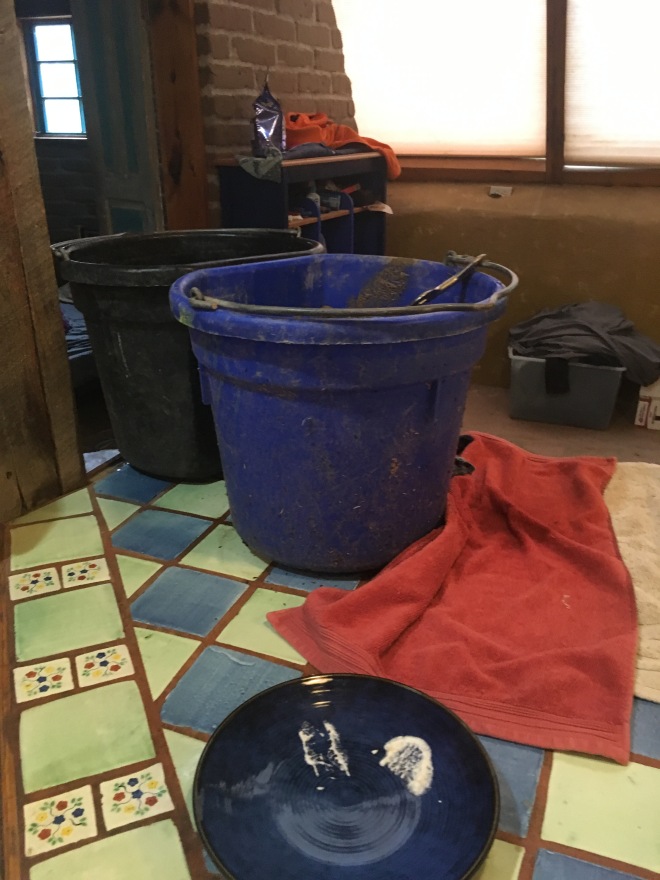 The well has gone out: 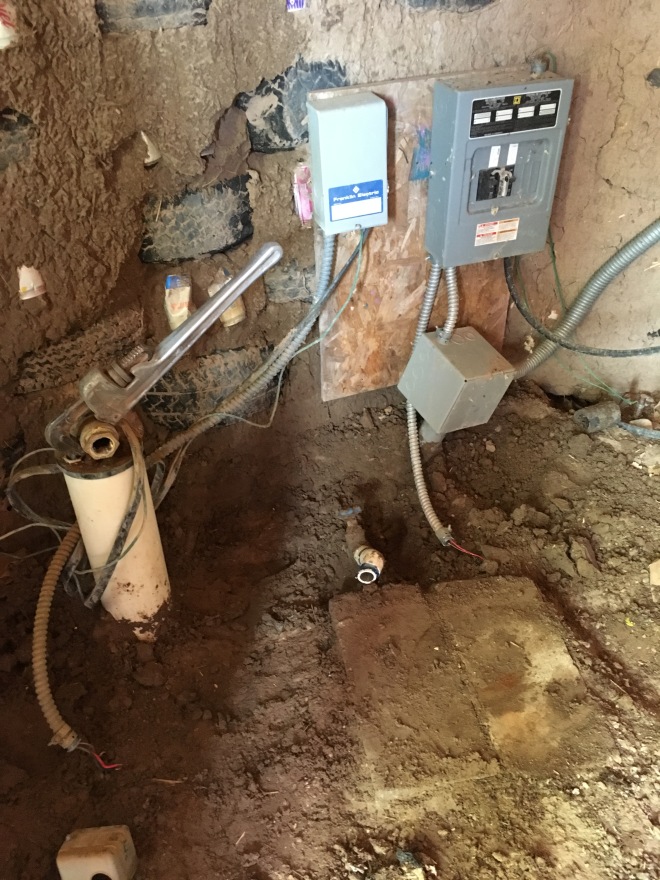 But at least the truck got a new paint job: 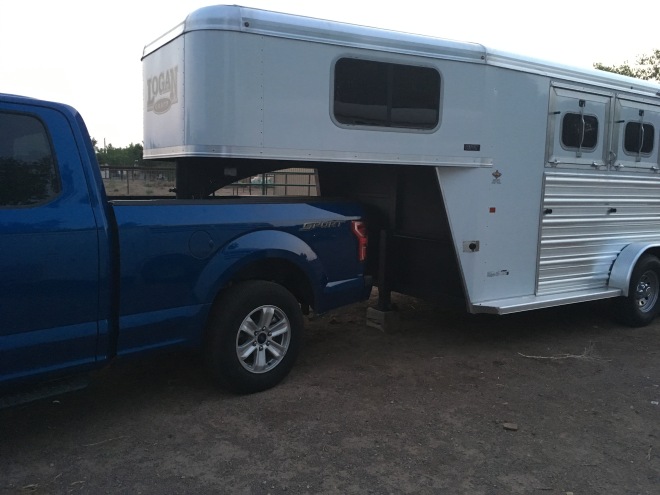 and the new gatos are all well: 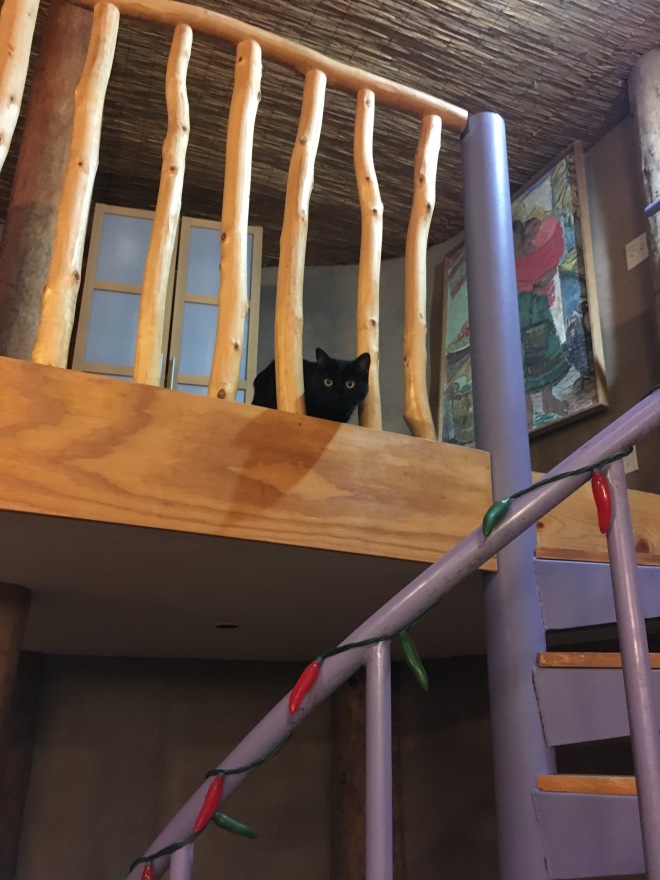 It might only be July, but the end of summer approaches…. 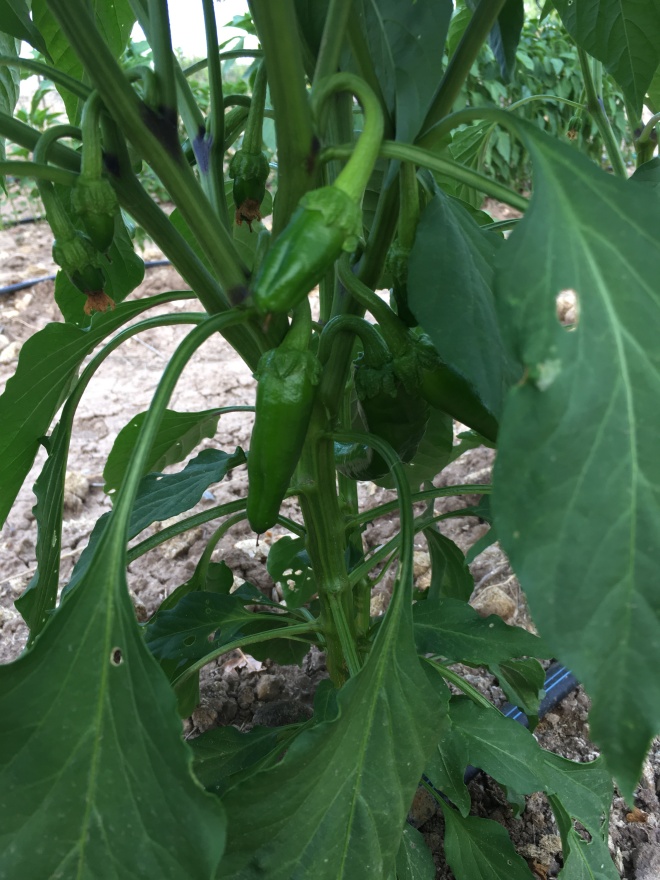 Trail day#– who knows. Doesn’t count anymore. Sagebrush cheated and got off the trail with an 80 mile car ride. Will have to start the whole thing over to count as a through hike. And a major fire is not an excuse.

Many years ago, on the loss of our second cat, Kimchi, we adopted a pure white cat, named Bao. We had a habit, at the time, of naming cats by asian foods. We had Sushi, Kimchi, Wonton, then Bao. Poor white Bao did not last long in a neighborhood with owls and coyotes. Lesson learned, and the next cat was pure black, Nori. Many years later, we have made the same mistake. Sister, the broken kitteh, the explorer, the one who would not come in at night, a pointed white over tortoise shell, met an untimely end. The rumor was a bobcat in the neighborhood. Lumplet, the grayling, needed a sister to keep her ears clean, so we started looking….

This is Owlet. 3 year old lovely pure black cat. Very affectionate, and knows how to say meh. But, we didn’t stop there! One adult cat rescue was not enough. Today, we brought home Cookie. 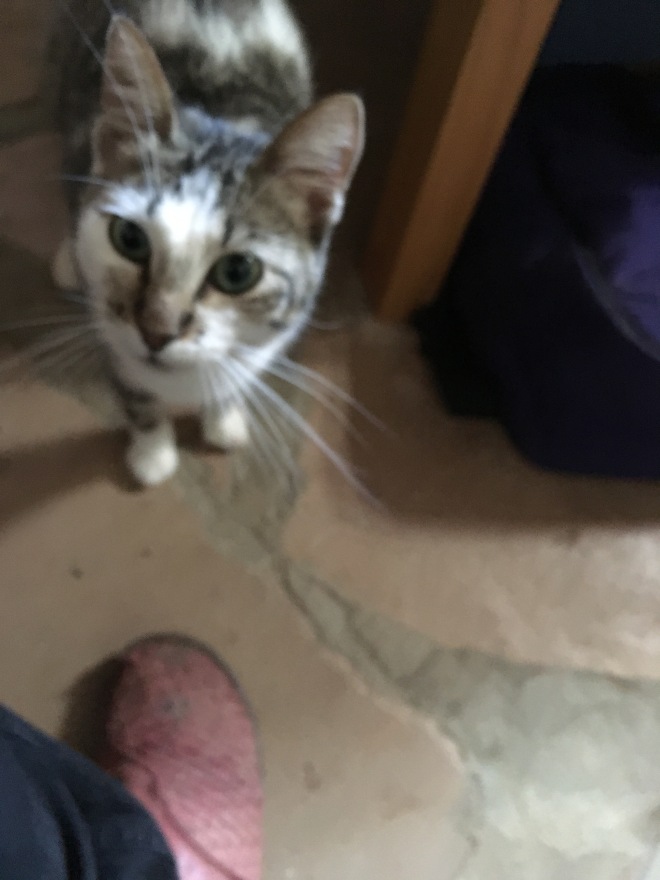 A young mom who has spent the last 5+ weeks at the shelter, and has nursed three sets of kittens. We thought she needed a break, so brought her home with the two new kittens she is fostering. We have a foster agreement on all three, but plan on sending the kittens back, when they are ready to wean.

Temporary names Tiger and Hamster. Eyes just getting opened, so maybe 10 days old. Daughter is aware that two orphans, both very young and fragile, a tired young mom who has nursed three sets of kittens, is a recipe to lose one or both. Will do our best to keep conditions optimal. Moose is eager to be a kitten uncle again.

What to do when your 23 year old daughter is having an existential crisis? Go camping!!! Unfortunately, chores and a state full of fire restrictions made the decision for us:

A beautiful evening and a beautiful(as always) Lemitar sunset:

The dogs got ready for bed(s):

Lumpy spent the night in the house, but was willing to explore in the morning:

Exploring kittens: Possible only one.

What, you may ask is Mooseversary? Two years ago this holiday weekend, this sad creature sat in the shelter: 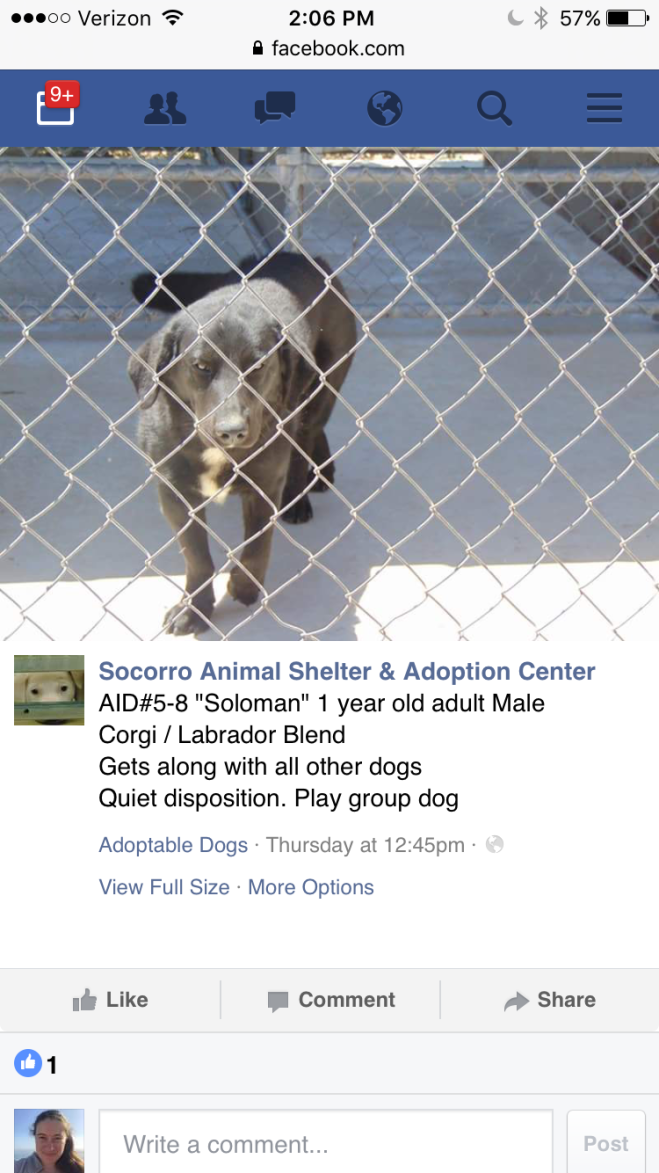 Look at those dull eyes and dull coat! But, a black lab! and a corgi! We decided to go look. The funny looking little dog would not let us go! We spent some time with him, filled out a temporary foster form, and the rest is history. First time in the house he peed on all our walls, chased the neighbor cat,  and escaped the well fenced field until a quick lesson about electric fences. Two years later, he is a most loved family member. 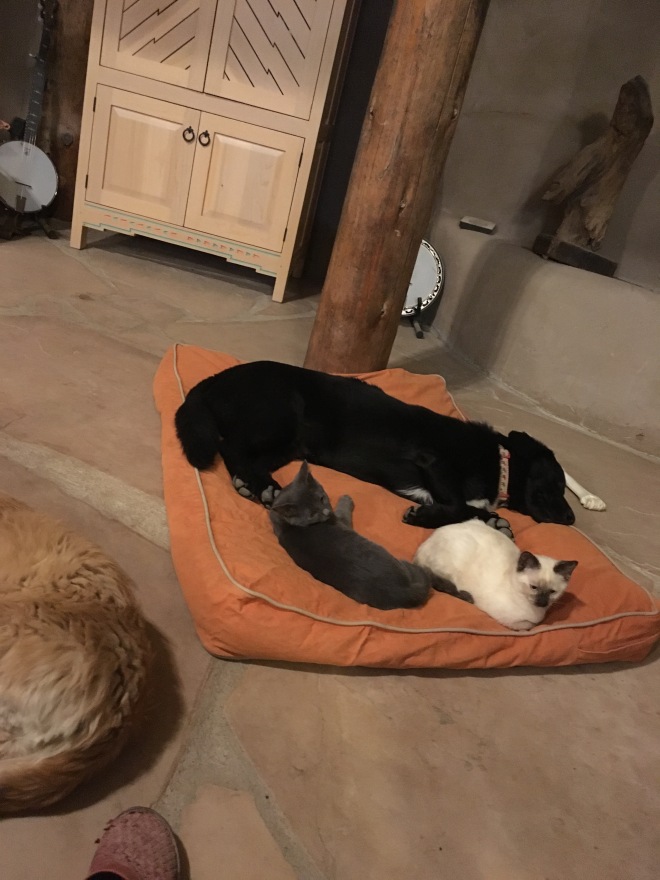 A good Moose-mom to the kittehs. 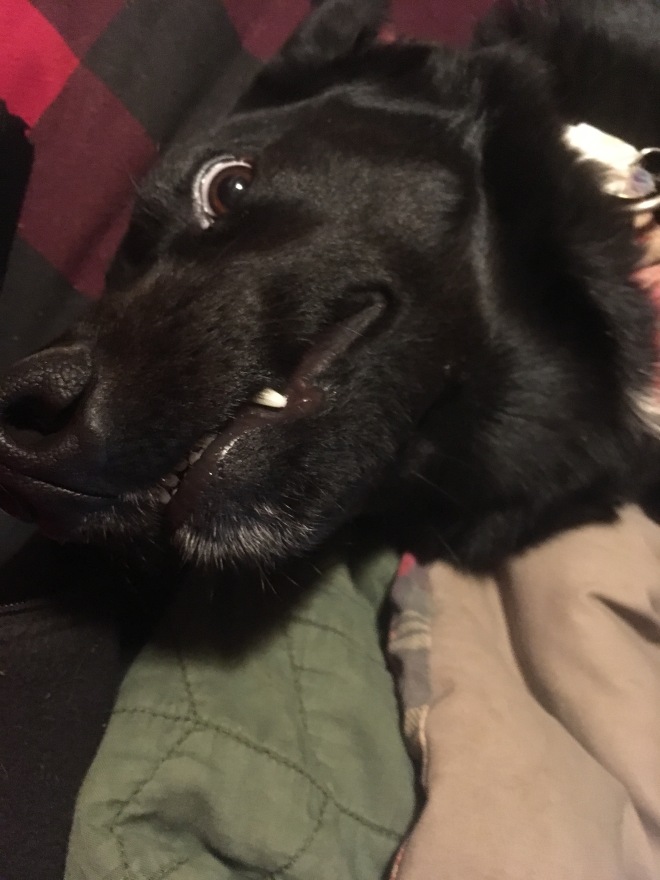 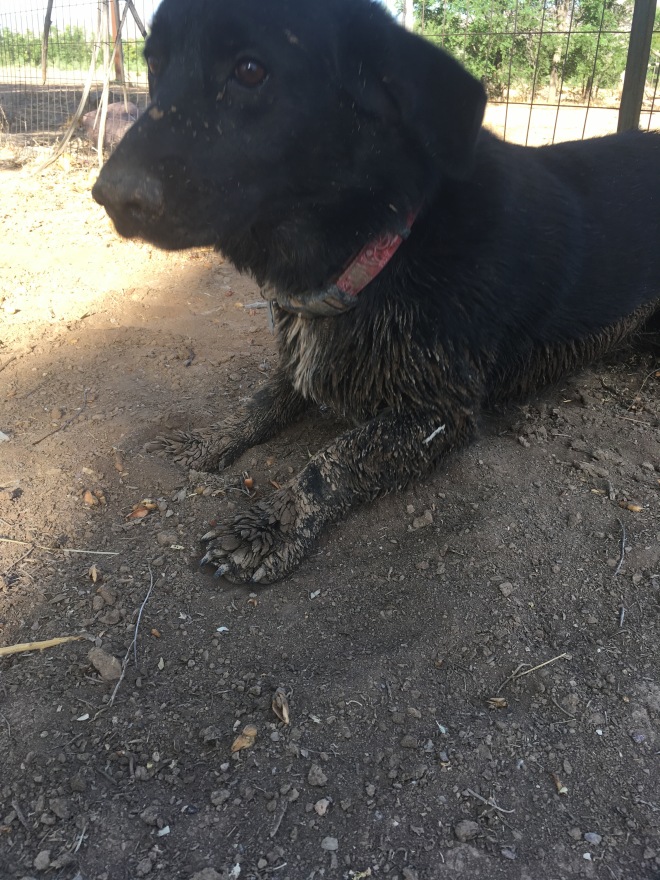 Good at getting dirty! And when we could not figure out why our 1/2 lab would not fetch or get in the water, plus bayed when he hunted, and we did doggie genetic testing, we discovered the reason: No lab in him. His parents were a basset and corgi cross, crossed again with a 1/2 rottweiller 1/2 aussie mix. Explains a lot! His baying, eager chasing rabbits, endless energy and funny feet!

Worrying about: (1)Sagebrush going too fast. WTF is 35 miles a day about??? (2)Daughter’s final exams-all five of them, for 1st year medical school. (3)Results ultrasound and feeling more tired after 2nd rabies shot.

Time to irrigate again. Next door neighbor wants to go again after only two weeks, instead of the usual three. He has newly planted alfalfa to water, and would like the holiday weekend off. I am awake before 4am, have my tea and then head out. Tree-farm guy has left water in our shared ditch, so I get water into the field unusually quickly. Usually it takes an hour from head gate, down the mile to us, but with water already in the ditch, time flew.

Little kitten’s get curious about the action.

Dogs get wet and frisky. All is done by 10am. A record fast run. Water turned over to neighbor, hopped in car, drove to ABQ to share lunch with daughter before ultrasound. Not a 35 mile day, but it felt pretty busy with addition of gardening, horse lesson, and usual chores.

So, 30ish years ago, our intrepid Sagebrush, started the AT, full of youth and hopes. A return of cancer call on his paternal parent, and True Love, called him away from the trail half way through. Took 20ish years to go back and complete.

Each time a long hike comes up, we have The Discussion. What family emergency would call you off the trail? Illness or death of parent or parent-in-law? Offspring? Siblings? As none of the above plan or expect religious services, we decided to discuss, but likely not come off the trail.

Who, you might ask, is missing from the above list?? Spouse!! We did Not discuss what to do with a spouse illness or death. So, here is the question of the day, answer after the kitten picture interlude.

What medical issue has come up this week for spouse?

(b) Infected cyst that will require office surgical procedure

I iz up very hi! I gotz up here and I dontz no how to get down. I iz very silly kitteh! Lucky my hoomon knowz how to check all evening for me.

The answer! I know you guessed. All of the above! The good news is that the medical visits, ultrasound, and minor surgical procedure will not be a financial burden, as the rabies series will cost $3000, and take care of the deductible for the year! And there is only a $5000 deductible for the family, so we are almost there if our intrepid hiker wishes to join in on the medical fun. 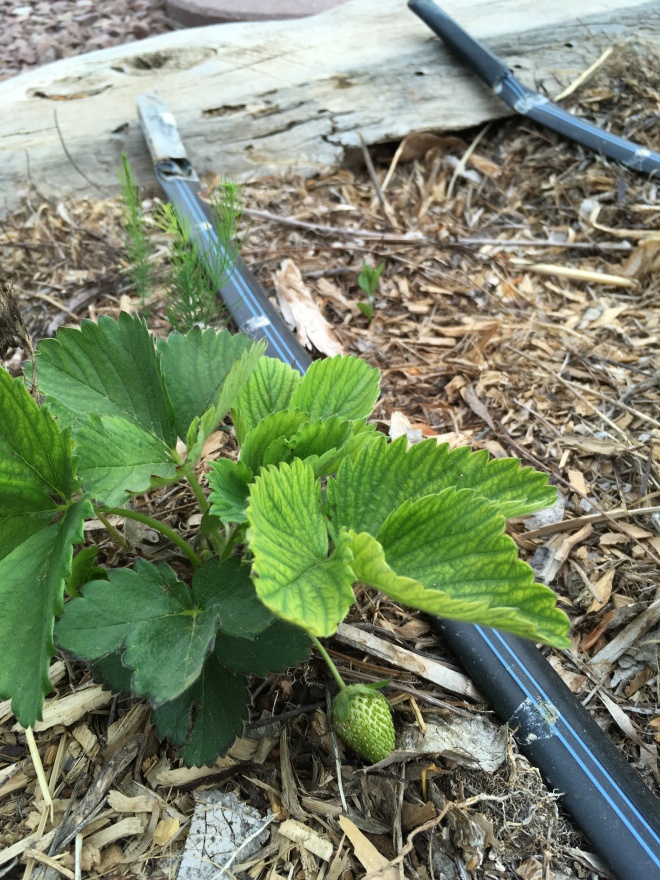 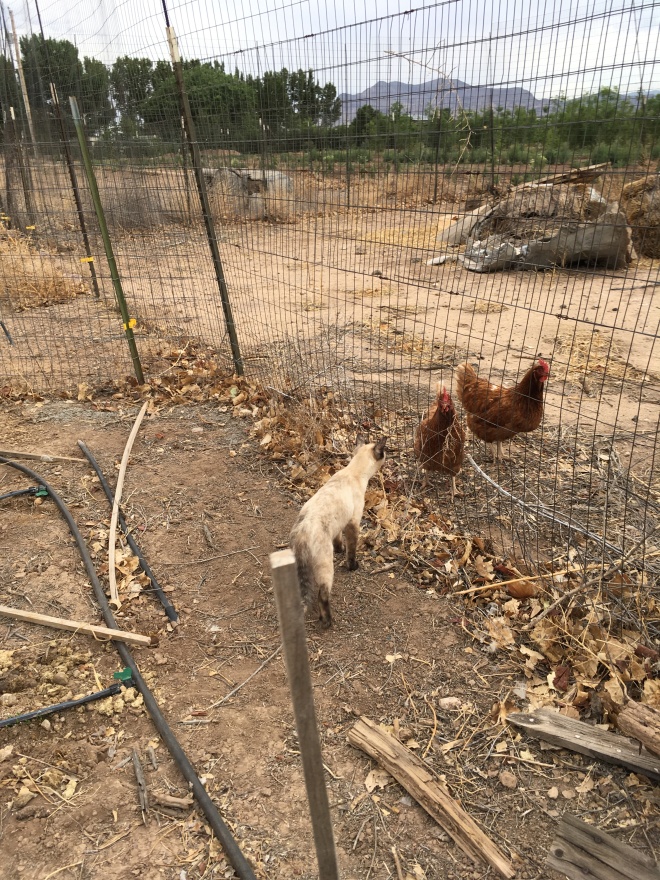 Today is a 29th anniversary of two young 31 year olds tying the knot. We certainly did it in style, a small adobe church wedding and a cowboy reception. Couldn’t think of a way to improve on it!

Things I have learned today: Making two or three batches of almond milk at a time saves lots of personal time and energy. Combining in one container somehow diminishes the total amount of left over sediment and prolongs the batch from 1.2 days per batch to 4 days per two batches. Who knew? A visit from 86 year old parent and partner is more personal time and energy consuming than support for a medical student daughter. Yeah, I guess I knew that.